No one that plays NBA or NCAA ball has ever made a quintuple double (achieving double digits in all areas: points, rebounds, assists, stals, and blocks).  But it has happened in women’s high school ball. 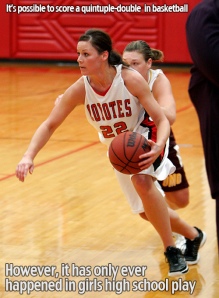 The first player noted to have done this feat is Tamika Catchings, while a player at Ducanville High School.  She went on to a carrer with the Lady Vols and now plays for the WNBA  Indiana Fever.  Tamika is the 9th person to have won a NCAA championship, an Olympic Gold Medal, and a WNBA championship.  She has refereed Baraka Obama in a 3 on 3 game, and is the 2012 WNBA Players Association president.  She has a foundation called Catch the Stars (I see what you did there) that helps youth achieve their dreams by goal setting, literacy, fitness, and mentoring.  Oh yeah, she was born with a hearing disability.

So what have you done today?