Live by the three

Today UNCG scooped an 84-49 win from the Furman Paladins with a record setting 15 made three pointers in the game.  This win puts UNCG in a 3 way tie in the SoCon at 5-11, with Furman holding the bottom spot at 4-12.  This 35 point win is UNCG’s largest ever SoCon victory and, hopefully, puts the Spartans in the right frame of mind to finish out the season, with games at home on both Thursday and Saturday.

While I am not usually a fan of teams that live by the three because unfailingly you must also die by the three, the energy on the court today has not been present in the last few home losses.  The team I watched today shared the ball and worked to be aware of each other on the court.  Big Man RJ White looked like he was gunning for the 1 spot hitting 4 three point shots early in the first half.  The crowd thought one was fun.  When he hit two it was great and three seems like he was on a roll, but when White sunk that fourth three the crowd erupted and he gave us a smile and a dance back down the court.  While we expect Nick Paulos to hit 5-6 threes, other Spartans contributing to the effort beyond the arc included Marvin Smith (2), Diante Baldwin (1), Asad Lamot (1- this was the most unselfish play of the night), Clay Byrd (1- before he twisted his ankle and was out of the game), and perhaps the most surprising was first year player Garrett Collins (1 as well as adding 2 points inside the line during his 7 minutes on the court).

In most stats, UNCG led the way.  51% of their field goals to Furman’s 37%.  The night belonged to the three pointer with UNCG hitting 60% of their attempts to the Paladins 15%.  From the free throw line Furman edged UNCG 60 to the Spartan’s 58%.  UNCG went 7-12 from the line.  Here Baldwin and White need some remediation both going 0-2.  In close games these points really matter!  UNCG set the pace with 12 fast break points over none for Furman and Spartans added 28 from the bench (18 of those belonging to White).

G keep up the momentum into Thursday! 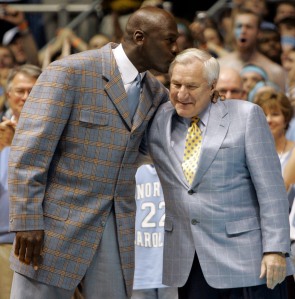 Growing up, Carolina Basketball was one of the only reasons I was allowed to miss church. We went anytime the church doors were open, but if there was a game Mom would make an exception and we would stay home to cheer on the Tar Heels. As a preschooler, I have vivid memories of taunting our Preacher, who had the misfortune of getting his divinity degree from Wake Forest, on the way to preaching on Sunday mornings or church supper on Wednesday nights. I would stop in my tracks, I am sure goaded on by my mother, and call- “Go Tar Heels” and he answered “Go Demon Deacons” while the parishioners looked on with indulgent amusement. I was a Tar Heel. The Tar Heels were my team.

My mom loves Carolina basketball. Through her, my sisters and I came to love the game as well. As we watched Dean Smith lead the Heels on the court, we got lessons like, “look how the scorer acknowledges the passer” and “see how Coach Smith would rather get a technical than not start a senior on senior night.” From the basketball court and through the T.V., Coach Smith coached me as well. While never a player, I learned to be a smart, engaged fan, to appreciate a well-played game, and to see how the lessons learned through basketball could be applied to my life, too. My good friend Derrick, a State fan, jokes that people in the South love Jesus, the Pope, and Dean Smith- though not necessarily in that order!

Like many others who are honoring Dean Smith, I can ply you with facts and statistics; my head is stuffed with them. He learned the game at Kansas from Phog Allan who learned from Dr. Naismith himself, joined Frank McGuire as an assistant at UNC in 1958, took the helm as head coach in 1961 amid point-shaving rumors with the missive only to run a clean program, was hung in effigy after a 1965 loss to Wake Forest, used the four corners strategy so well that in 1985 the NCAA created the shot clock, retired in 1997 with 2 national titles, 11 Final Four appearances, 879 wins and a 77.6% winning record. All of these accomplishments are important, they add up to what his work was, as a coach, but they do not begin to cover his importance to UNC, North Carolina, and basketball.

As a basketball fan, it wasn’t just supporting a winning team that made me a Tar Heel. It was the lessons that I learned from Coach Smith, through basketball, that were the most important.

As I got older, I realized that Dean Smith was special off the court as well. His memory is legendary. Those who knew him said he could recall details of games played years ago and would remember to ask about your family members by name. He was also quietly and solidly a progressive moral compass that I could set my own sails by. He was an unapologetic political activist, cultivated by his father who coached the first racially integrated basketball team in Kansas in 1934, but always quiet and never shouting it. When he arrived in Chapel Hill he joined Binkley Baptist Church because it included everyone. As an assistant coach, he, along with an African American theology student, went to The Pines, a restaurant on Franklin Street, and stood together to be seated. This was real work in the still segregated south of the late 1950s and by the time the sit in movement came to Chapel Hill places like The Pines were already integrated. In 1966, he recruited Charlie Scott to play for UNC and with that action integrated the ACC. He was a vocal opponent of the Vietnam War in the 1960s and recorded anti- nuclear weapons radio spots in the 1980s. In 1998, he appeared at the clemency hearing of a death row inmate and told then Gov. Hunt, “The death penalty makes all of us murders.” In retirement, he took stands against the Iraq war and for gay rights. Dean Smith, along with fellow North Carolinian Andy Griffith, were my models for how to think about issues that we face in our daily lives and how to navigate living with integrity and doing what is right with the power that you have.

I’m always happy to rehash Tar Heel basketball details, like how free throws and time outs were factors in both the 1982 and 1993 National Titles, but what I will remember about Dean Smith has much more to do with the lessons he coached me through as a spectator and Tar Heel Fan.