This is has been a great year in UNCG basketball with a record breaking 25 wins.  Tonight’s 79-74 loss to ETSU was heartbreaking.

UNCG swept ETSU during season play and there is no love lost between these two teams.  Technical fouls and scuffles during the handshakes have been part of their meetings on the court this year.

The Spartans had the energy in the first half of this game and it disappeared at halftime and never returned.  Like so many games, however, this one was lost on the free throw line.  Those points are crucial and can swing a game as close as this.

Nonetheless, it was a great year to watch the Spartans!  In sports, like in life, you gotta shake it off and look forward to the next challenge.  And UNCG’s next challenge is a good one…NIT here comes the G!

Posted: February 23, 2017 | Author: secolonna | Filed under: Uncategorized | Comments Off on 32 years ago today

32 years ago today this piece of American history took place. While my child would have never played for Coach Knight, and chair throwing is blatantly wrong (for which he owned up) there are 2 things that I

❤ about Bobby Knight- 1) In the time after his coaching retirement, he was the BEST basketball analyst 2) I deeply resonate with the quote about Coach Knight “If there are two things that Bobby Knight hates it is stupidity and a weak defense.”

NCSU had a rough day

Posted: January 8, 2017 | Author: secolonna | Filed under: Uncategorized | Comments Off on NCSU had a rough day

Every time NCSU and UNC play the Wes Miller Bobblehead goes up for grabs in Greensboro.  He’s been with us for a while and there was never any danger of him making the trek to Derrick’s place today.

The Tarheels dominated a discombobulated looking Wolfpack.  I tuned in when the Heels were up 26-4 and that about says it all.  The final score was 107-56.

This 51 point margin marks the largest spread ever against an ACC team (previously it was 48 points over FSU in January of 1998).  This is the most points the Heels have ever scored against State and the 4th time UNC has scored more than 100 against the Pack.

Wes stays with us until the next UNC-NCSU match up.

Posted: December 9, 2016 | Author: secolonna | Filed under: Uncategorized | Comments Off on So close

Wake wins 78-75. If the Spartans would have hit a few key free throws they’d have brought down their first ACC opponent at home.

The Spartans take the Bulldogs into OT, fall by two

There have been three games since I have posted so let me catch you up:

1- The New Year’s Eve afternoon game against Mars Hill College was a blow out with the Spartans defeating the Lions 92-48.  This game was played in Fleming gym and basketball is a great way to spend a holiday afternoon!  Nick Paulos hit a long three at the halftime buzzer to get the crowd to their feet.  This game was also where first year player, #1 Marvin Smith, got some significant playing time– 21 minutes.  I’m excited to watch him mature into a great ball player.

2- On January 3, Mercer, a newcomer to the SoCon, traveled to Greensboro.  They are a tough, team that plays well together, a formidable opponent for anyone.  If you will remember, Duke learned that the hard way when the Bears knocked the Blue Devils out of the tournament.  In honor of that moment and to congratulate the Bears for their ESPY I did what I do best- glitter up a poster 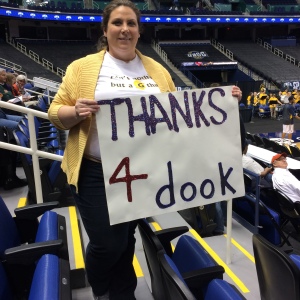 The only proper way to spell dook 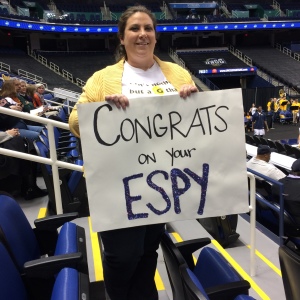 I believe in letting people know when they have done a good job- even if I did want them to loose the game.

UNCG fell 55-76 after trailing for 40 minutes only tying the score once.  It was hard, but the Spartans had a hard time connecting from beyond the arc (28%) and their free throw percentage was a paltry 45% (5-11).

3- Tonight, at the game by myself, the Spartans took the Bulldogs to overtime before losing by two 83-85.  UNCG got off to a strong 5-0 start and the lead was bantered back and forth.  There was a lot of sweat left on the court tonight!  The Citadel beat us on the free throw line 85% to our 71%.  They only put three of our player on the charity stripe (Locke going 10 times), but those points could have made the difference!

And just for fun:

Santa, through his NYC-based elves, left us tickets to the UAB-UNC game, so on this beautiful, warm December afternoon we  caravanned to the Dean Dome for a late afternoon game.

Last year UAB surprised UNC in Alabama.  This year the Blazers traveled to Chapel Hill and lost 89-58.  Marcus Paige and Justin Jackson pulled the Heels away with their three point shots.  Paige had been off his shot for the past few games but today connected for 2-6 from beyond the arc.  Justin Jackson hit 2-3 of is three pointers.  Kennedy Meets was on his game tonight cleaning up under the basket, hitting mid-range jumpers, doing his part from the line.  Though, the free throw stars for the night go to Isaiah Hicks (5-6) and Nate Britt (4-4).  Those FT percentages win games, especially as conference play draws closer.

Tonight is the first night I paid much attention to the new point guard Joel Berry.  The point guard position is a hard one to learn.  He is beginning to get his feet under him and blossom (short bursts) in the role.  Marcus Paige is shining bright right now, but it is good to see Berry learning how to be a Tar Heel PG.

On another note, while I was hopeful that neither Louisville nor Kentucky would win….Kentucky did.

Former SoCon rival Elon beat UNCG today 71-64.  It has been since January 2010 since the Spartans have bested the Phoenix.

Though in the first half Elon was in desperate need of a break for dribble drills, they had three (if not four, I stopped counting) turnovers on walks.  If you move with the ball, you have to be dribbling it.  Pretty simple, really.  The Phoenix also twice fouled our three point shooter- the dumbest play in basketball.  There was sloppy passing on both sides and UNCG just could not get their feet under them.

I am also confused as to why Diante Baldwin did not start.  He played 30 minutes, but did not start.  The Spartans are more focused with a point guard on the court and Baldwin is the best player for that position-why is he not starting?

As for stats, Elon lead in points in the paint, points off turnovers, and points off fast breaks.  Their bench was deep contributing 29 points to our 6.  Wes was frustrated and it showed.  He was particular animated on the sidelines and with just a few seconds left in the game a Technical Foul was assessed to the bench, but it was on Coach Miller.  He was mad and it is always nice to see passion on the sidelines!

Coming off last game’s free throw shooting, this game was marked improvement 23-30 (77%) and 10% better than Elon’s 67%.  Of course, the 7 points left on the court would have pushed us into overtime.

Our next home game is on New Year’s Eve in Fleming Gym.  Such a fun place to watch basketball.

I would be remiss if I did not mention the halftime score of the kentucky-UCLA game: 41-7.  Yes, UCLA scored 7 points in 20 minutes of basketball.  Those players in that particular shade of blue scored 24 points before the Bruins put any points on the board.  God, I hate Kentucky.  But it did lead to this sentence, so there, “This was the most lopsided first half of basketball since the Monstars jumped out to a 66-18 lead on the Tune Squad in the movie Space Jam.”